As many have heard the name Robert Burns and usually in association with a Lodge Burns Supper, many still may not know who this Freemason is and why he is important.

First let’s look at the basics:

Robert Burns (25 January 1759 – 21 July 1796), also known familiarly as Rabbie Burns, the National Bard, Bard of Ayrshire, the Ploughman Poet and various other names and epithets, was a Scottish poet and lyricist. 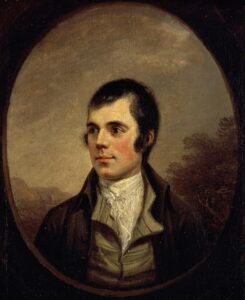 He is widely regarded as the national poet of Scotland and is celebrated worldwide. He is the best known of the poets who have written in the Scots language, although much of his writing is in a “light Scots dialect” of English, accessible to an audience beyond Scotland. He also wrote in standard English, and in these writings his political or civil commentary is often at its bluntest.

Robert Burns was initiated an Entered Apprentice in Lodge St. David, Tarbolton on 4 July (ironic date) 1781, at the age of 23. His initiation fee was 12s 6d, and paid on the same date. Like many other times in his life, Burns came into the lodge amidst a controversy. Originally, there had been only one lodge in Tarbolton, chartered in 1771 from the Kilwinning Lodge, which is said to be the oldest lodges in the world (again, another story worth telling, yet for another time).

In 1773, a group broke away from the lodge, forming Lodge St. David No. 174, and the original lodge became St. James Tarbolton Kilwinning No. 178, only to be reunited in 1781, 9 days before Burns’s first degree. However, while St. James was clearly the older of the two lodges, St. David’s name was used, and the seeds were sown for further dissension. Burns in the meantime was passed to the degree of fellowcraft and raised to the degree of Master Mason on the 1st October 1781. The Lodge record book, according to James Mackay’s “Burns” reads as follows: 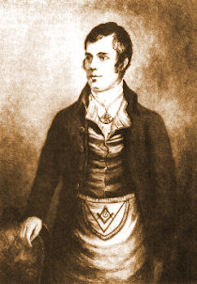 Robert Burns in Lochly was passed and raised, Henry Cowan, being Master, James Humphrey Senr. Warden, and Alexr. Smith Junr. Do., Robt. Woodrow Secy. and James Manson Treasurer, and John Tannock Taylor and others of the brethren being present”.

Burns was an extremely popular poet Laureat and lyricist of his day.

Typically nearing the end of January some Lodges host a Robbie Burns Supper with traditional Scottish flair and signing of Scottish folk songs as well as the traditional pipping in the “Haggis”. If you have never witnessed these events, well you’re in luck as this year, the Scotia Lodge 634 is hosting a “virtual Burns supper”.

The good news? Since there is no food or drink involved, THERE IS NO CHARGE!

The event is open to Brothers and their male friends.

If you have ever wondered what Burns Night at Scotia is like, THIS IS YOUR OPPORTUNITY to find out at NO cost!  The details are below, at the bottom of this message.

Although we must postpone the Batchelors’ Club debate, YOUR participation is STILL possible!  Here are some options:

1.  Turn on your phone (or a video camera) and record a joke that we can play back during the event.  Send video clips (or a link to video) to RJGnyc1@gmail.com and we can include it.  If we have enough clips we will play them during the event.
2.  Use your phone or camera to record your own video clip of an interesting fact or legend related to Burns, to Scottish history or culture, etc. and we can share it during the event. You can even record a “fact” that you have completely made up (followed by the truth).  If you have questions about this, call or text 212-777-8080 and VW Bob Gengerke will address them.
3.  A copy of “Tam O’Shanter” will be sent to Scotia members for their participatory reading.  If you have not read in the past but like to be assigned a selection to read, please submit your request to RJGnyc1@gmail.com before Friday afternoon 1/21/2022.